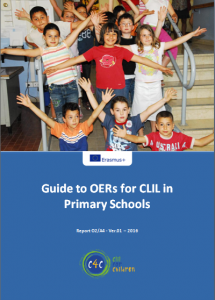 To use the hyperlinks of this report, you have to unzip the file using the “extract here” command: you have to mantein the same directory structure contained in the zipfile.

If you have not an unzip software installed in your computer, you can download the open source 7-zip software here.

The Guide to OERs for CLIL in Primary Schools is a kit of contents resulted from the combined effort of four C4C partners to collect and census 90 Open Educational Resources (OERs) to teach English through CLIL in primary schools (ages 5 to 12 or grades 1 to 6) in a series of European countries, namely: Czech Republic, Italy, Germany, Poland, Portugal, Romania, and Spain.

C4C partners surveyed CLIL OERs of good quality in the areas of Science, Mathematics and Geography in order to establish a sound baseline from which to develop the following products targeted at primary school teachers:

Thus, the survey on OERs in the above countries was carried out by keeping in mind the need for selecting and identifying several types of resources and materials:

There are many organizations in each one of the above mentioned countries and on the web that have organized pools of resources for primary and secondary CLIL, among which a couple of European consortia and EU-funded projects, the British Council, and many primary and secondary schools. However, as agreed, the C4C Guide to OERs not only explored these pools of Open Resources for CLIL, but selected from them both lesson plans and resources according to topics for CLIL Science, Geography and Mathematics, which were described and rated for the use of teachers, students and teacher trainers.